How I chose studio recording equipment for livestreaming and working remotely, for under $150 CAD

Since starting working from home to combat the pandemic two months ago, I’ve set up a professional recording and video conferencing “studio” right at my desk. Here’s how I did it for under $ 150 CAD, along with detailed rationale of how I decided which components to purchase, so that you can tailor to your own home office situation and needs. 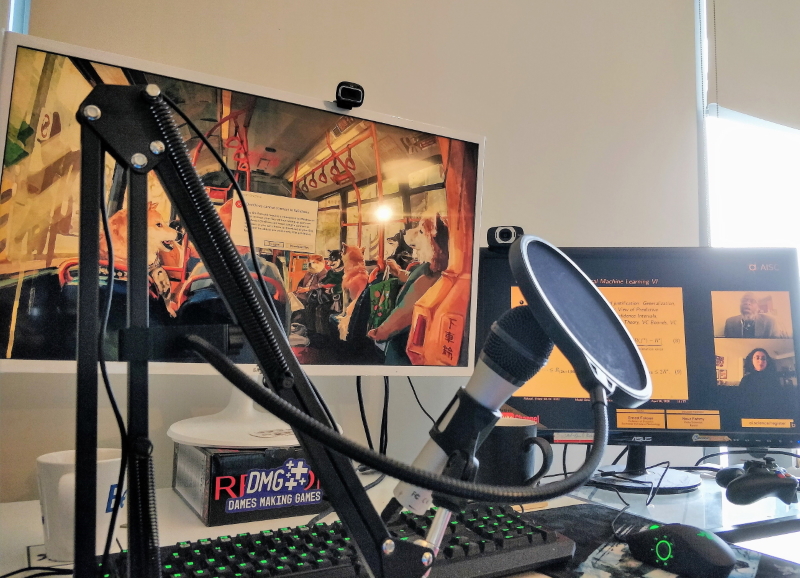 Below is a list of all the hardware I have, along with CAD prices I purchased them at (pre-tax). Note that I bought everything on Amazon unless specified, but because I bought everything pre- or early pandemic, I noticed some prices have gone up, presumably due to demand.

Detailed explanation of how I picked recording equipment

Apart from video conferencing for work, I also moderate and livestream machine learning talks at A.I. Socratic Circles. Previously, I streamed video games and video game coding on Twitch for some time, which is why I had put so much thought into audio quality, while under a tight budget.

I also wanted a setup where the microphone could be swiveled and adjusted to my sitting position, and easily swiveled back out of the way when not in use, because I live in a small apartment. Hence, I built this setup with the main considerations of professional quality, but also budget and practicality.

I picked the Audio-Technica ATR2100-USB because of its studio quality as well as budget-friendly pricing. One major point for me is that it offers two outputs - USB which is simple to plug into any computer for digital recording and livestreaming, but also XLR output to use with a conventional sound system or mixer. Information I found suggested that the flexibility of two outputs could help me scale up in the future if I upgraded with more studio equipment such as getting a audio mixer. For more information on audio mixers, this is a good article.

Taking this into consideration, I was not only looking for an affordable price point but future scalability without needing to purchase yet another microphone and making unnecessary purchases.

As an update, the version I got with Micro USB is no longer available, but replaced with the Audio-Technica ATR2100x-USB* which takes a USB-C.

I purchased the pop filter due to most resources recommending it, but I was initially too lazy to set it up. The filter is a mesh screen that disperses air from talking so that there isn’t the “pop” from air hitting the mic from one’s mouth. I did some recording tests by myself without the pop filter, and concluded that it sounded okay. Therefore, my pop filter lay to the side, gathering dust for a while.

I didn’t use a pop filter for some time, but hearing the pops in recordings prompted me to set it up

However, once I had done a few livestreams, I went back to listen to the recordings. There were audible “pops” especially when saying “p” and “b” sounds. This does not happen when using, say, a webcam’s low quality microphone, but with a studio quality microphone, the sound is captured. It does not sound pleasant, and once I noticed it, put the pop filter on immediately.

The ATR2100 microphone came with a small tripod-esque stand out of the box, which I used for some time. There were practically no benefits to using that stand: it took up too much desk space, and was too flimsy to put the pop filter on, and would topple over. The worst part is that it was too low on the desk with no way to adjust its height, and thus I would have to lean close to the desk to speak, which was uncomfortable and often made my face cut off in the webcam. 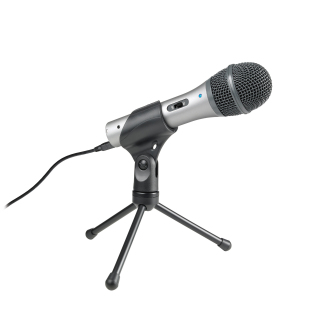 I decided I needed a scissor arm stand, which allows for height and angle adjustments. In addition, it is clamped onto the desk, taking up minimal space, and can be pivoted out of the way easily when not in use. The best part is that I can be relaxing and leaning back in my chair, and simply bring the mic close to me with a quick touch. Out of all pieces of equipment, this is the only one I ordered after the pandemic had become full-blown, but the price point is quite reasonable despite the increase I’d noticed due to shortages.

The scissor arm stand was actually a bit tricky to pick - most of the affordable stands can support the weight of a normal microphone and pop filter with no problem, but the clamp might not be suitable for all desk sizes. I measured my desk thickness beforehand to ensure the clamp would fit - as you can see from the images below, the clamp only fits on two of the edges of my desk, but not the two others, which are thicker. This is something I recommend you pay extra attention to when browsing online.

And that’s it for how I picked the equipment to do livestreaming, recording, and conference calls at a studio quality straight from my home! Working with a tight budget and small space, I managed to make it work. Once again, I did notice that the availability, especially those of webcams, have reduced during the time of the pandemic with the increase of people working from home, but hope that my research and tips can help you find a setup that works for you.