I previously wrote about how I studied for my master’s degree while working full time, how I developed video games while either studying or working, and how I passed the CFA Level 1 exams in 6 weeks. What all of these complete “projects” had in common was my “habit journaling” system.

This is a tried and true system - in this article I take a trip down memory lane by examining my high school journal, where I tracked my study time, and see what 2 key tactics have stood the test of time from then until now!

I kept journals plan and manage my study time when preparing for the standardized university entry exams back in Taiwan. I ended up scoring in the top 4% (across ~150,000 examinees). By taking a look at my time management techniques back then, I’m hoping to unearth some patterns that overlap with my “habit journaling” approach now, to demonstrate the tactics that stood the test of time. 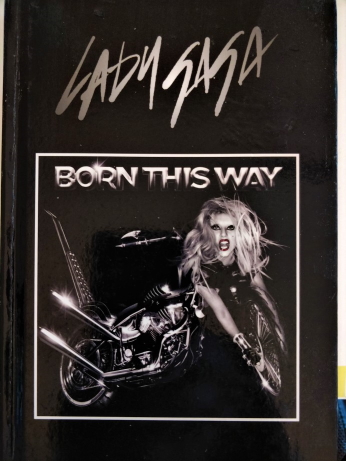 Flipping through this journal really brought back memories. I don’t think I’ve changed that much, since I put stickers from tech conferences on my current journals, but I keep it simpler now - only one or two stickers allowed per journal! 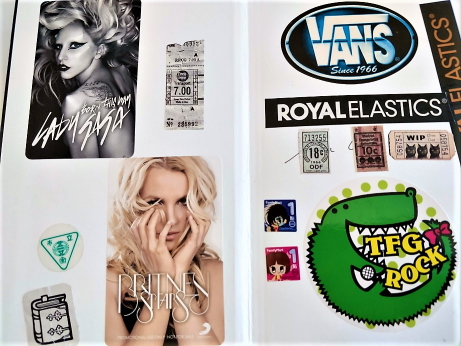 Image 2: You can tell that this journal definitely belonged to a high schooler.

For full disclosure, I was never a model student - I barely passed most subjects, and spent late nights past midnight in the Ximending district and Dong qu. I was part of a rock band, and liked to drink vodka cocktails sold in convenience stores that wouldn’t ask for IDs.

I even fell asleep so often during physics, that the teacher joked that I should put a photo of the top of my head in the yearbook, because that’s all he saw of me (I would sleep with my head slumped on my desk).

But at the beginning of my senior year, I simply had a realization that the university entrance exams could make or break my future, so I got myself into gear. Let’s see how I used journals to track my time, enforce self-discipline, and really turn my studies around. 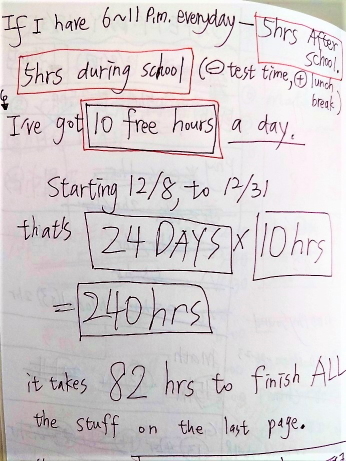 Image 3: I was really strict with myself with these estimations of study time.

I calculated an estimate of how many hours it would take to complete all the chapters and subjects I would need to finish studying by certain dates.

The step I would do before this, was to list out all subjects and exercises I needed to do, then tally up the times. (This is similar to how I planned for my CFA Level 1 exam study preparation).

At the beginning of each week, and even each day, I would pre-plan the subjects and the components of the subjects I wanted to work on. If I want to make progress on Math and Geography, I will look at what is a priority - for example, if I’m more behind on math, I will put more time slots for math exercises.

According to Image 3, I alloted 10 hours a day to study. (Note: as an adult now, I envy the youth I had! High school me also hadn’t learned about burnout, yet.)

That 10 hours/day estimate would mean I might put 6 hours into math, and 4 hours into geography. Next, I would pick from the list of study materials - for example, in math, to brush on a stats and probability chapter, I would quickly skim the exercises before I put down an estimate. This is because sometimes a topic or chapter would have more practice questions than the average chapter, or I felt the topic was more difficult and might take more time - so I would bump up the time I budget to it. 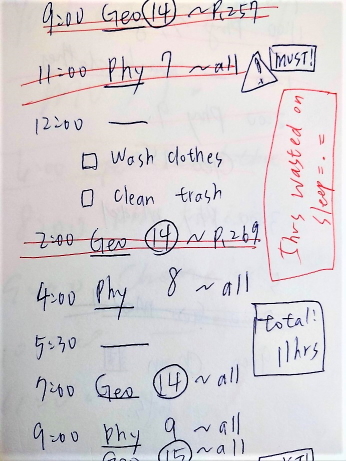 On this day in Image 4, I started at 9 AM, and studied geography (chapter 14, till page 257). It was complete in 2 hours, so I crossed it off and continued to study physics.

As you can see, the items later in the day were not crossed off - which means a variety of things could have happened:

In both cases, it doesn’t matter - I continue down the list in order, and carry over the items I didn’t complete, and the time I owed, to the planning for the next day. For someone who was such a slacker before my senior year of high school, this tactic of pre-planned time blocks, really solidified my self discipline.

This is a killer technique, since the items I didn’t complete wouldn’t be forgotten - which ties in with the next point I leveraged to make this time management system effective: accountability.

At the end of each day or week, I would tally up how many subject chapters or exercises I owed from the previous time frame. In the below Image 5, you see I owed 19 hours (estimate) worth of studying in a week. 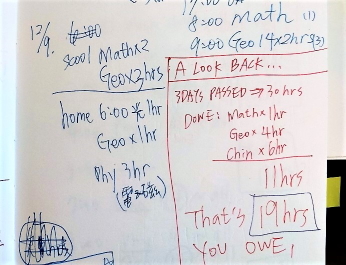 Image 5: The key to accountability is simply not letting yourself off the hook.

Now, the high school me was really being aggressive, and I’ve since loosened up, but one approach remains the same - having this transparency helped me become more accountable, and ensured that the planned blocks I didn’t complete didn’t simply vanish.

It is way too easy to say “I’ll do that calculus chapter tomorrow”… and then forget about it completely. I elaborate on how the current me uses accountability as a productivity tactic in “The habit journal is an accountability builder”. 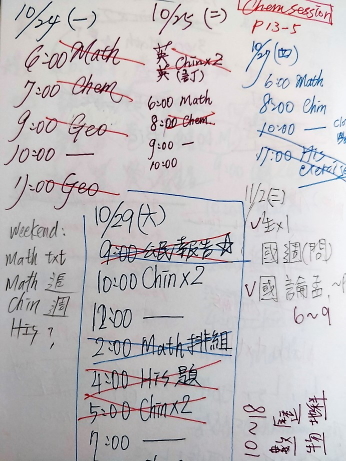 As you can see in Image 6, with the combination of the pre-planned time blocks and Accountability tactics, I was able to get a lot of studying done. And this was a system that I started before I was 17 years old, out of desperation and as a response to a complete lack of self-discipline.

Since then, I’ve experimented and refined the system many times over, but it was really fun to dig out this old journal, and really think to myself “wow, some things just don’t change”! It really shows the endurance and effectiveness of having a good time tracking system, along with the good habits of pre-planning time blocks and holding oneself accountable on the journal.