How to develop T-shaped skills - Do it yourself mindset

One mindset that has helped me a lot is “do it yourself”. I tend to be curious about the creation process behind experiences and products that I enjoy, for example learning programming to make video games instead of only playing them.

Growing up, I remember seeing my mother apply the same principle - she did home maintenance such as fix plumbing issues or tinker with wiring. She also makes artisanal soap from scratch with animal fat and herbs grown in the backyard, plants crops (corn, beans, etc.), and is an entrepreneur. All this, coming from a bachelor’s degree in engineering.

Nowadays, both of us outsource plenty of those tasks, that we once did out of curiosity. However, having that drive to learn from first principles, to reaching a journeyperson level competency in many, seemingly random, topics, has benefited my career growth.

In other words, this “do it yourself”, or DIY, mindset can can be thought of as building the horizontal bar of a person’s “T shaped skills”.

In this article, I’ll examine how to rapidly expand the breadth of one’s skills in different areas, and why this is so important to staying competitive in a rapidly changing world.

T-shaped skills are a result of DIY, not a goal

Even though it’s become an overused term in business, to the point it loses its gravitas, I do agree that having T-shaped skills is beneficial for one’s career.

The thing is, despite the perception that acquiring T-shaped skills is an end goal in order to attract employers, it is often an “accidental” result of curiosity and taking action on curiosity - having a “Do it yourself” (DIY) mindset.

To illustrate why being T-shaped is often an accidental byproduct - having an explicit goal of becoming T-shaped might be as if in school you purposely, not accidentally, “allowed” yourself to get 95% in calculus, but 50% at maximum in other subjects.

Even if one achieves the above by purposefully allocating more time to a specific subject, the initial reason is likely because they like calculus, and not because they are trying to limit themselves to 50% in chemistry.

With this example, it seems more likely that acquiring a T-shaped skillset is a result of one’s interests or choices, rather than the only end goal. Next, let’s see how one can work toward a DIY mindset, and subsequently build T-shaped skills. 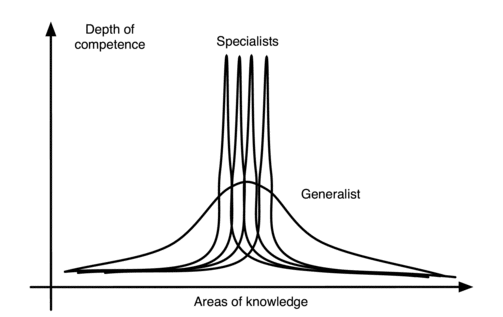 The above graph depicts specialists and generalists in terms of the breadth (x axis) and depth (y axis) of knowledge, respectively.

Note that in this case, generalists don’t have a uniform distribution (same depth in many topics). They do tend to have depth in some topics, but the spike isn’t as pronounced as those of a specialist.

Using university/college as an illustration, a degree with many electives creates that broad base, with a slight bump in the generalist curve, and then a master’s or PhD degree bumps one up to the pointy specialist shape. Undergraduate programs with little to no electives and rigid schedules, such as engineering at University of Waterloo, is more similar to the spiky specialist.

A “typical” T-shaped skillset refers to a combination of both - having a broad base like that of a generalist in the graph, but also having a spike. Graphically it would look like a union of them: \(Generalist \cup Specialist\).

But, regardless of university curriculum, one can easily build the broader base of their skillset via clubs and extracurriculars. Otherwise, they may go out of their way to audit electives, despite their program not having much leeway.

For professionals, breadth can be built by participating in meetups, sports or other hobbies. When encountering something one is curious about, e.g. home maintenance, don’t be afraid to spend some time to DIY - these all count toward expanding the base.

Here are some examples of resetting myself to the beginner mindset and keep expanding my areas of knowledge.

In a fast paced and changing world, it can be exhausting to try to keep up with new research being released every day. I’ve heard this from folks I know in the data science field, and I concur.

This situation may pose a career challenge in certain fast paced fields, which I will illustrate below. 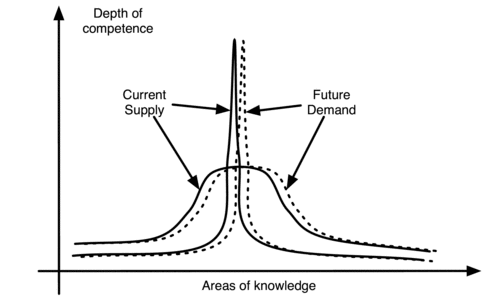 Graph 2: How specialists and generalists fare in a changing industry. Source: ERE

The above graph illustrates how being a specialist can be dangerous in some situations. If the field changes or becomes obsolete, starting from scratch to build another pointy spike (dotted line of spiky distribution) could require ~5 years.

On the other hand, those with a broad base covering more ground in areas of knowledge, can find more flexibility in their career if the future demand shifts by the same magnitude. They can reuse a large amount of the base knowledge without much difficulty.

I feel that my DIY attitude has helped me built quite a broad base, simply because I take action to learn the basics of many topics out of curiosity, not just because “it’ll help my career directly”.

In addition, I earned pointy specialist skills in at least 2 fields, data science and game development. Note that this article doesn’t cover how to build depth - these articles on data science cover my approaches to that end.

To tie into how I feel that the broad base helps me in my career, here is a concept of career moats.

A career moat is an individual’s ability to maintain competitive advantages over your competition (say, in the job market) in order to protect your long term prospects, your employability, and your ability to generate sufficient financial returns to support the life you want to live. - Cedric Chin, Career Moats

This is akin to how the generalists with the broad bases in graph 2 have large overlap between the current state of the industry, and future shifts, whereas those with only a spiky shape (and no broad base) are in danger in the face of industry shifts; they don’t have a career moat.

On a practical note, the DIY mindset requires a shift from always being a consumer to being a creator. It’s mentally taxing to start from the beginning of a learning curve, and so we get comfortable, and hold on tightly to our specialist spikes, which can be dangerous. We can build resilience to shifting markets by building a broader base.

I like to get my hands dirty with topics that I am curious about, usually learning and applying at least the basics. I find that this DIY (at least once) attitude has helped me build a wide range of knowledge in different fields.

In the modern (tech) workforce, having a wide range of knowledge, and subsequent specialized spikes in data science and game development, helps me build a career moat against the fast paced changes in industry.

This all stems from the DIY mindset that tinkering with wildly random topics can be beneficial and rewarding.

More articles about "self learning"